A hacker's journey towards becoming a scratch golfer

I took my new TomTom Golfer 2 (£199 at American Golf UK) out for its first road test this week.  Straight out of the packaging you can see that it probably looks the best of the wearable tech golf watches on the market.  I went for the smaller strap grey version.  The rubber strap is more flexible than I have seen before, and it has a really nice metal clasp that gives it a really high quality feel.   Putting it on it feels like a nice piece of kit that you are happy to wear without getting too battered by your fellow players for having all of the gear and no idea.

When you switch it on its instantly recognisable what you are looking at if you have used any distance tech in the past decade.  The big numbers you know are the distance to front, middle and back of the green.  You get the hole number and also the yards since the last shot.  That is a great addition as you start to see in real time how far you are hitting each club.  When you get to delve deeper into the features, you work out that by swiping to the right you can see how far to the bunkers and hazards to help you with your shot selection.  All very easy to use even on the first time on the course.   The watch doesnt use any tags as you get with Shot Scope or Game Golf, so the watch doesnt know what club you have used it just knows when you have made a swing.  The benefits of this are clear, you dont need to do anything really every shot but also you wont get club feedback at the end of the round as you will with the other technology.  So its a weigh up between what stats and feedback are important to you.

I used my TomTom Golfer 2 for the first time this week at Prestbury.  When I got to the club it was simply a case of using the control pad underneath the display to swipe right and find the course nearby.  Select Prestbury and away you go on the first tee.  I am not sure what would have happened if we started a shotgun start on 5th for example, so I will have to update you guys on that in the future but lets face it – how many times do you not start on the 1st Tee.  True though that for £200 you would hope it can handle it.

So it found the Course and away we went.  Straight away though was the first and biggest problem of the TomTom Golfer 2.  Still on the tee box I was over enthusiastic with looking at the watch and manually recorded a tee shot on the tee box.  So on my scorecard it logged the shot as 9 yard drive!  At the time it didnt bother me as I would expect to be able to delete that shot as you can with other tech.  On we went and the distances worked fine and seeing in real time how far you are hitting is interesting.  You start to notice that the Golfer 2 records your practice swing rather than your actual swing – so be careful doing that too far away from your ball if you want accurate readings.  It didnt however record multiple shots for mulitple practice swings which would have killed the product dead right there.

Getting to the first green you have to remember to manually tag a putt.  Its just a habit to get into and its really easy with the TomTom Golfer 2,  just hold your hand over the screen.  I found that it was most useful to do this just as you began lining up your putt.  If you hit the ball my emotion of the putt led  me to completely forget to tag and simply be more involved in where the ball went. 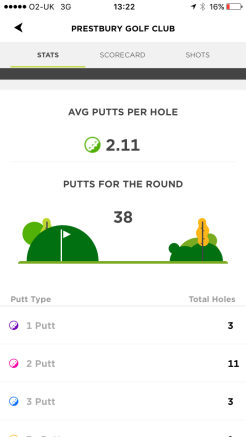 Clearly the main reason for these things over just a distance laser is what you learn about your game after the round.  I have to say that the graphical stuff you get from the watch wihout tagging is very good indeed.  I have included a selection of screenshots from TomTom MySports App which you download to your smartphone and sync with the watch via bluetooth after your round.  Something that really annoyed me though is the fact that the shot I mentioned previously, the mistaken phantom shot, cannot be deleted.  This is something really basic that TomTom needs to look at as its not good enough.  Every other tech on the market seems to have this feature to either manually add a shot or edit a shot or remove a shot in the analysis section if it is done in error just to tidy up the round when you are home.

Overall I can see this being the kit I try and use for the time being as it helps me in real time with shot distances and doesnt require any tagging of shots.  I am very forgetful when it comes to doing the tagging stuff – maybe I gave up on that too quickly I will do some more research into the GameGolf Live – I just used the GameGolf basic model previously.  It is the best looking kit on the market which helps a lot when this is a game of confidence.  I really liked the ShotScope for example but the watch hardware itself isnt great to look at and you do look like you are a prisoner with a tag on your wrist.  In conclusion though there are some problems with the watch, I would have the option to buy club tags to go with it for sure so that you can have post game club by club analysis – and I would definitely get them to increase the editability of the shots you take to clear up the rounds afterwards but it is a good piece of kit that I have no hesitation in recommending.

I am your average amateur high handicapper. A hacker. I started this blog in December 2016 with a handicap of 20.8 with the goal of one day being a scratch golfer. Don't we all? I really believe that I will and this blog will document the journey towards that goal. Thanks for stopping by.
Follow Twenty2Scratch on WordPress.com
%d bloggers like this: